Experience an extraordinary PostBus round trip across international borders. One national park, three countries, two mountain passes and three wonderful valleys. A detour to Samnaun is the perfect way to enjoy duty-free shopping.

The journey begins in Zernez and travels through the natural paradise of at the Ofen Pass to cross the Swiss border in Müstair. From there, the journey takes you via Taufers to Mals, where a stop in Vinschgau is recommended. Passing Lago di Résia over the long Reschen Pass, the driver from the local public transport company Südtiroler Automobildienst transports you up to Nauders and over the Norbertshöhe to Martina. There, you can switch to the Postbus. After the journey through the romantic and wild lower Engadine valley, you reach Scuol.

What about a detour to Samnaun? Where the region promises a duty-free shopping experience. But the real adventure is the Postbus journey. Try it yourself!

Vinschgau is a cultural and leisure region in South Tyrol that offers an enormous amount of diversity. There are historic items from the ancient world to be discovered, while food connoisseurs will be sure to get their money’s worth, and hikers and cyclists will also be rewarded with numerous trails.

The tower in the lake

A prominent landmark in Vinschgau is the half-submerged tower in Lake Reschen. The deserted church tower is fascinating and fairytale-like, as well as a popular image on postcards. The Romanesque church was submerged when the lake was dammed shortly after the end of the Second World War.

Go to the online timetable

The Postbuses departing from Zernez, Staziun at 9.34 a.m. and 11.34 a.m. require a reservation. No additional Postbuses will be used for these journeys. For all other journeys on the Engadin–Meran route, reservations are not required for individuals.

For groups of 10 people or more, registration is required – by 4 p.m. the day before departure, either by phone or by e-mail.

During the summer season, Postbuses (with the exception of minibuses) have handy bicycle racks on the rear of the vehicle. Transportation of bicycles is not guaranteed. If your bicycle cannot be loaded for capacity reasons, it will be transported on the next PostBus service. Bicycle transport is not available on the Postbuses departing from Zernez, Staziun at 9.34 a.m. and 11.34 a.m.

Wheelchair accessibility is guaranteed to a limited extent in the Postbus. The National Park Centre offers a range of mystical and inspiring experiences for children and adults alike. 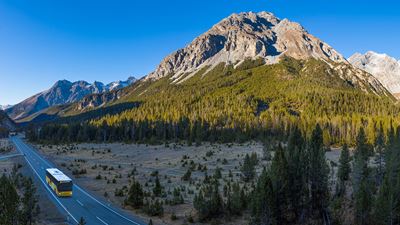 Experience a fascinating Postbus journey through the Swiss National Park, over the Ofen Pass and through Müstair to Mals in South Tyrol via the Engadin–Meran route. Enjoy the beautiful route from the Alpine town of Davos over the Flüela Pass to Susch in the Lower Engadine valley.