The PostBus calendar 2023 will hang in many living rooms, kitchens and offices in a completely analogue way. For fans of commercial vehicles, there is also the vintage vehicle calendar, which public transport expert Jürg Biegger has been publishing for 38 years.

For those who buy the PostBus calendar 2023, there’s a new landscape picture featuring a Postbus to enjoy every month for a year for 29.90 francs. We were thinking about stopping the printing of the calendar in these increasingly digital times. “However, the demand shows that the calendar has a certain cult status. There are even a growing number of enquiries from abroad,” says Pasquale Arleo from PostBus Marketing.

Ordering option for the PostBus calendar

Exclusive photos for the scene

The vintage buses calendar by Jürg BieggerTarget not accessible, a public transport expert from Eastern Switzerland, also has cult status among its die-hard fans. At least half of the pictures depict Postbuses.

The retired secondary school teacher still sells 450 of them every year – ten percent go abroad, many to the Netherlands, probably because of the lowlanders’ fascination with mountains. “The exclusivity of the calendar’s images plays a key role. That’s because my customers are well informed about the scene,” says Jürg Biegger. The 75-year-old has taken most of the photos himself over the decades. He considers all vehicles older than 25 years to be vintage.

Teacher with a fascination for public transport

Jürg Biegger was passionate about commercial vehicles even as a child. “But my parents were musicians, so bus driver wasn’t a career choice they wanted for their son.” During his geography and biology studies in Zurich, however, the secondary school teacher in the making worked as an inspector at VBZ, which allowed him to develop an appreciation for public transport.

Since 1981, he has published more than 30 books on historic commercial vehicles in the publishing house he runs on the side. His classic, “Die letzten Schnauzenpostautos”, published in 1981, sold 4,000 copies. “These days I’m happy if I can cover the production costs,” says Jürg Biegger – but of course he already has his next project lined up and is eager to see how sales of his 38th vintage vehicle calendar will go. 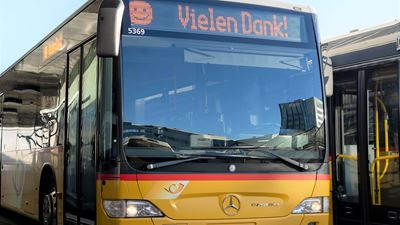 Passengers feel very safe in Postbuses and also give top marks to the drivers. We’d like to say a big thank you! Nora Zimmerli loves people and engines, and is in the middle of training to become a PostBus driving instructor. PostBus brings Switzerland together and is part of the Swiss identity.